Katie Young calls the court to order and delivers sentence on The Judge, now out on DVD and starring Robert Downey Jr and Robert Duvall…

I really like Robert Downey Jr. He’ll be forever ingrained in the hearts of Marvel fanboys and girls everywhere as Tony Stark/Iron Man. His roles in films such as Wonder Boys, Kiss Kiss Bang Bang, and Zodiac mark him as a versatile and gifted performer. I firmly believe Sherlock Holmes: A Game of Shadows was one of the most enjoyable films of 2011. And I think he comes across as a bloody nice bloke.

So with Downey Jr. at the helm, executive producing and starring opposite the formidable Robert Duvall, and with a strong supporting cast including Vera Farmiga and Billy Bob Thornton, I had high hopes for The Judge. But half way through the 142 minute running time, it struck me that this is a movie that tries hard to be many things, but in doing so comes across as bloated, muddled and bordering on self-parody.

We start off in safe enough territory, with Downey Jr.’s Hank Palmer as a smarmy, fast-talking defence attorney with no qualms about using his ample skills to get guilty clients off the hook. “Innocent people can’t afford me,” he cheerfully informs the hapless prosecution lawyer in the gents. But acerbic wit quickly gives way to some glum soul-searching as Hank descends into a litany of tragic clichés. His marriage is imploding, leaving him fighting for custody of his oh-so-smart and oh-so-adorable young daughter. His beloved mother’s sudden death draws him back to the town and the family he forsook twenty years earlier. And things go from bad to worse when Hank’s father, Joseph, the town judge of forty odd years, is accused of a hit and run murder on the day of the funeral. Hank chooses to defend his father, but the longer he stays in his hometown, the more unpalatable truths about his past are unearthed.

It’s unfortunate that Downey Jr.’s character in Tropic Thunder so famously and memorably embodied just the kind of awards-fishing displayed in The Judge. At times, it reminded me of the premise of Oscar Gold, the movie dreamt up by Tearjerker in American Dad, intended to make cinema patrons literally cry themselves to death. Marriage breakdown? Check. Sweet, learning disabled younger brother who also happens to be a genius amateur movie maker? Check. Another brother who had a promising baseball career in his sights before the terrible accident which no one will speak about? Check. Dead mother? Check. Terminally ill father? Check. Cute kid who wants to know why Mummy and Daddy don’t love each other anymore? Check. There’s even a scene in which Hank and his father come to blows as a tornado rages outside during which the term ‘pathetic fallacy’ practically danced in front of my eyeballs in neon lettering. 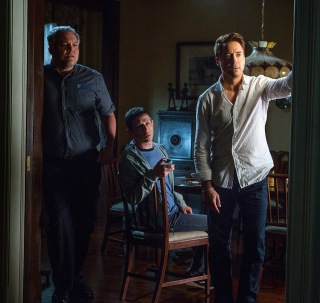 As someone who has been known to cry at a Katy Perry music video, usually I can forgive any amount of overblown sentimentality if the characters and story move me. But something about The Judge just feels off. Each time we get close to something difficult or confronting, something that would set this apart from your average courtroom or family drama, it is swerved at the last second. The scene in which Hank must help his increasingly frail father into the shower, covering them both in excrement, could have been body horror on a par with something like L’Amour. For a few moments the audience is faced with the ugly truth that age and disease will reduce us all to this helpless, infantilised state eventually. But the scene is interrupted by Hank’s cutie pie daughter, and our leading men dissolve into giggles, undermining the shock of that image. Similarly Hank’s unwittingly incestuous dalliance with a barmaid is played for laughs in a curiously misjudged plot point.

It doesn’t help that there is very little character development for any of the supporting ensemble. Hank’s brothers, Glen and Dale, are the stereotypical jock gone to seed and idiot savant respectively. The local yokel lawyer is so green, he pukes every time he sets foot on the courtroom steps. Women don’t fare well at all, reduced to a shallow wife, an idealised dead mother, a high-school sweetheart who’s a port in a storm, and her Lolita-esque daughter.

Perhaps the strange tonal shifts in the film can be attributed to the fact that director David Dobkin, whose back catalogue includes The Wedding Crashers and Fred Claus, is more experienced in comedy than weighty dramas. It may also explain the film’s identity crisis. With elements of comedy, romance, John Grisham style legal mystery, and family melodrama, it’s hard to know exactly what kind of movie The Judge wants to be.

That’s not to say it isn’t an entertaining and lovely-looking film. Janusz Kaminski’s cinematography is a thing of beauty, the script is largely well written, and there are many commendable performances from a great cast. Both Downey Jr. and Duvall are strong leads. But sadly this isn’t enough to enable us to suspend disbelief as the climax of the hit and run hearing sees Hank and his father air their dirty and very personal laundry over the witness stand. Presumably conflict of interest isn’t a concept they are familiar with in Indiana…

I hereby find The Judge guilty of employing hackneyed tropes, Oscar-baiting, and the flagrant waste of Billy Bob Thornton’s talent.

This entry was posted in Uncategorized and tagged film, review, robert downey jr, the judge. Bookmark the permalink.