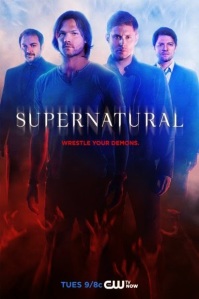 Let’s hear it for the girls this week, as returning characters Jody Mills and Donna Hanscum team up for a bit of sleuthing when some grisly deaths shake the sleepy town of Hibbing.

While last week’s Girls, Girls, Girls brought several strands of the season’s main arc together, Hibbing 911 is a simple, old-fashioned monster of the week type episode. Forced to attend a ‘Sheriffs’ Retreat’ in Hibbing, Minnesota, a reluctant Jody Mills meets super-enthusiastic cop Donna Hanscum (or Fat Spa Donna as Dean calls her in reference to her introductory season 9 episode, The Purge).

When the body of a graffiti spraying Banksy wannabe turns up almost completely stripped of flesh, the local sheriff puts it down to an animal attack, but Jody isn’t convinced. She calls Sam and Dean who are going stir crazy back at the Men of Letters bunker, looking for lore on the Mark of Cain, and they decide to check it out despite Jody’s insistence that she can handle it. The boys arrive in their FBI monkey suits, only to find Mills isn’t the only sheriff in town they’ve encountered before.

As the body count rises, Jody and Donna cautiously bond over their shared love of police work. Jody oversteps the line when she calls Donna’s ex-husband a fat-shaming douche, and Donna inadvertently rakes up the traumatic death of Sheriff Mills’ husband and young son, but when Donna witnesses the sheriff of Hibbing standing over a dead policewoman and in full vampire mode, she is brought into the Winchester circle of trust and proves invaluable on the hunt for the nest.

I love Jody Mills and Kim Rhodes. I also really like the character of Donna, who reminds me a lot of Molly Solverson from Fargo. Donna is adorable, although there is a tendency for the writers to push her character over into parody territory at times. Brianna Buckmaster is a lovely actress, and she effortlessly conveys a mix of warmth, determination, self-doubt and heartache with each slightly desperate smile. Donna has a very real quality which is illustrated by the reaction she has to discovering monsters are real – hiding behind a tree and trying not to hyperventilate.Overall I thought this episode worked really well. It had that old-school Supernatural feel which I am a sucker for. There were some lovely details such as the blood spatter stencil left by the dead vandal, and The Weight playing over the shot of the boys driving in the Impala as they headed to the aid of their friend. The VFX were great too. I enjoy it when Supernatural remembers it’s a horror show and gets down and gory. I quite liked the notion of the sheriff being a former ‘Charles Manson’ to a band of wayward hippy vampire kids lead by a bloodthirsty Lolita-esque flower child who believes eating people is love. Kinky.

But somehow, although there is a very clear chemistry between Rhodes and Buckmaster, the dialogue between the ladies wasn’t always convincing. While it’s heartening to see them run rings around the sexist gun vendor or Donna’s dick of an ex, the script lacked subtlety at times and made what should have been a fun and empowering episode feel a little patronising. In order to make their ‘chalk and cheese’ relationship funny, Jody was portrayed as somewhat crabby, and Donna as bumbling, when actually both characters are fiercely competent and inherently good people, coping with personal demons and loss. Donna’s ex was reduced to something of a caricature, which made her enduring love for him less believable. I would have liked to have seen a more rounded character, someone charming or funny who you could imagine her falling for and capable of blinding her to years of insidious little comments which would erode her self-confidence.

“Agent! Are you looking for some teeny weeny handcuffs to slap on some paws?”That’s not to say there weren’t some wonderful lines. The banter between the Winchesters when Sam mocks Dean for being overprotective of his pretend FBI job, and Dean tells Sam he should be proud of the fake badge he made at Kinko’s was inspired. I also loved the prickly, slightly flirty stand-off between Dean and the deputy:

It’s usually very noticeable when an episode is light on Winchester presence, so it’s testament to Kim and Brianna that Hibbing 911 didn’t leave me wanting too badly. I loved the parallel conversations in the final scene, with Sam wanting to know how his brother is doing, and Jody and Donna planning to stay in touch and exchange notes on monster hunting. It seems the boys might be tentatively allowing a support network of friends to build, and there’s a motherly touch to some of Jody’s actions, something which must be a source of joy and consternation to them, knowing how women they loved like Pamela, Ellen and Jo ended up. Let’s hope the supernatural world’s answer to Cagney and Lacey stick around for a while yet.

So a fun, standalone episode before we hit the mid-season finale, and all the carnage and angst it’s bound to bring. See you next week for some inappropriate appreciation of Jensen Ackles’ blood-spattered face? Excellent.