Things get even darker this week as certain factions decide to take matters into their own hands in the wake of the gruesome attack on Margaret Allerdyce, and Carrie returns to Fortitude without her father.

While the doctor is still alive (barely), Shirley has fared less well since we last saw her stagger off into the night. She’s found in the supermarket by Petra and Ingrid, dead of an apparent heart attack, a fact sheriff Dan is eager to reiterate when the townsfolk start muttering about a serial killer. Technically, he argues, Charlie Stoddart is the only actual murder victim to date, which must be a source of great comfort to everyone…

With Governor Odegard on the mainland trying to smooth things over with her ice hotel investors, the miners decide to impose their own form of martial law, and Dan and Morton are forced to get along and work together for the first time. In fact they are practically bezzies in this episode, double-teaming the unfortunate and exceptionally creepy Markus in one of the least professional police interviews ever.

At first they have little to go on other than the feeder’s personal connection to both Allerdyce and Liam Sutter, and his 80s record collection which is straight out of American Psycho, but then some disturbing revelations come to light. Frank breaks into Markus’ place and finds photographs of topless young boys smeared in blood, as well as spank bank images of Shirley tucking into stodgy foods, and old family snaps. Having been handed the photos by Frank, Morton and Anderssen proceed to grill the teacher on his dark predilections and his relationship with his mother – also a larger lady – although without actually asking questions as Markus reasonably refuses to answer any without a lawyer present.

I do find the complete lack of regard for things like legality and admissible evidence in Fortitude is a tad irksome, although I suppose it could be argued that it’s one of the things which adds to the pervasive sense of threat. What hope is there of finding justice or safety in a secluded and largely lawless environment?

The other main development this week is the return of Carrie, minus her ailing father. While Dan sends a team out to look for Ronnie, Elena finds herself taking care of the little girl. Elena is a much more sympathetic character in this episode, thawing slightly towards Anderssen, and clearly frightened about what’s happening in the town. She also saves one of the Russians from misdirected vigilante retribution by a braying mob in one particularly unpleasant scene.

Ronnie wakes from a spell of being face down in the snow to find he’s been abandoned, and makes his way back to the house, only to discover a home movie of his late wife playing on a projector in the darkened living room. Rapt by the film, he doesn’t notice a masked intruder until it’s too late and he’s bludgeoned with something heavy. Could whoever beat Ronnie be the reason he was on the run? By the time Elena returns Carrie to her bedroom, Ronnie has disappeared. Poor Ronnie. He’s been doing the same pained grimace for seven weeks now. I’m half hoping he’s the next to get mammoth madness just so his face gets a rest. 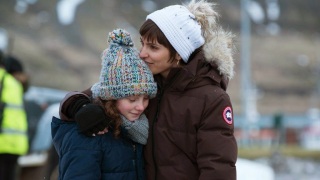 Elsewhere in Fortitude, a crisis meeting is held by the inhabitants, which descends into chaos when Vincent admits the animals are displaying odd behaviour, and an old guy shoots himself in the foot in a moment of bleakly comic relief. Dan struggles to maintain order, but hush descends on the rabble when Hildur returns, having ended her marriage to Eric and failed to secure help from the mainland. No one is coming to rescue Fortitude, a fact that Hildur blatantly lies about to the assembled townsfolk. Perhaps they will be needing Henry’s shamanistic magic after all.

We end on another violent altercation, as Frank – perhaps seeing a chance to clear his son’s name – breaks into Markus’ home once again and ties him up, intent on extracting answers from the teacher by any means necessary.

Both Dan and Elena showed glimpses of a softer side this week, with Dan expressing concern for Petra when she started to have a panic attack, and berating Frank for jeopardising his investigation, and Elena caring for Carrie and stopping the humiliating attack on the Russian. There was also some genuine chemistry between Dan and Morton, even though there is still clearly a lot of mistrust between the two men. Their strange, grinning exchange as they left the town meeting was a joy to behold. There was even a glimpse of tenderness from Hildur as she contemplated the end of her marriage. And Darren Boyd turned in an excellent performance as the sociopathic Markus. He’s fast becoming the best thing about the entire series. I would still like to see more evidence of multi-faceted natures to these characters, and for the ensemble cast to be more evenly employed to create a real sense of community and believability.

It must be noted that this episode looked absolutely stunning, and the sense of dread was palpable. This was definitely the week that Fortitude earnt its horror stripes.

Henry highlighted an important thematic point too, musing on the fact that people need myths and stories. With everyone in Fortitude seemingly constructing their own version of the truth, we’re once again left wondering what is actually real, and whether we can trust anyone or anything – even our own eyes.